2006-05-04 "Google Censors Online History of America's Fascist Ruling Class" by Glen Yeadon, from the Streets of Little Beirut
[http://www.waronfreedom.org/press/GlenVsGugl.html]
For anyone alive the last six years it is obvious that the national media is being censored by the Bush regime and only serves as his mouth organ. Those seeking the truth have relied on foreign news media and a small army of internet authors. Many of these internet sites have reported problems stemming from the Bush regime concerning their content. In the past my web log has revealed that I've received numerous visits from just about every intelligence organization in the government
For more than five years this author's web page has enjoyed the top two positions in a Google search using the keywords Nazi Hydra. I was surprised when my web traffic abruptly dropped to a fourth of the average daily traffic. Today I found the cause for the sudden loss of traffic Google purged my main page from their search engine. A search using the two keywords brought up numerous sites that had referenced my work as well as a couple of the chapters from the book. Retrying the search adding my name and then my ISP yielded the same results. Not only is this censorship, it's a violation of my free speech rights.
Since my book Nazi Hydra has enjoyed top positions in most of the major search engines using the title as keywords I retried the search in several search engines. The search failed in only four of the twenty searches. The failures were Google, AOl, Netscape and MSN. All the other search engines had the main page listed in a top position. Every since Google went public it seems as if they are more concern with being politically correct for the Bush fascist regime than in producing a quality search engine. The top positions in the other search engines confirm the validity of the link and its ranking leaving no other conclusion than the decision by Google to remove my top position was politically motivated by the Bush regime.
For nearly ten years I have made the pages of the Nazi Hydra in America freely available on the internet adding chapters as they were completed until the book totals about 700 pages. As long as I'm alive and free to do so I will continue to make the pages available until the book is available in print form later this year. Once the book is published I will continue to make portions of the pages available and provide a link to the publisher. The pages will disappear only if the Bush regime shuts down my we site.
Having Google purge the URL makes it obvious that this is a book the Bush regime does not want you to read. The reader should be asking himself why. While the book does cover some members of the Bush family in an adverse manner the overall focus of the book is on American fascism and not the Bush family. Yes, the President's grandfather was essentially Hitler's bagman in North America and had 23 companies seized from him for trading with the Nazis after the United States entered the war. If the government especially a rogue government like the Bush regime is trying to hide something from the public one can be assured its not for their benefit.
Given this administration's repeated demands for the power to declare martial law and the emergency funding for FEMA to upgrade and build concentration camps makes it vital for everyone to understand the imminent threat and danger of fascism. If you wait until the gestapo is pounding at the door your children and grandchildren will curse the ground you walked on.
Perhaps, Bush was right when he screamed that the constitution was just a damn piece of paper. The only freedoms you enjoy are those that you are willing to fight for. Whether you read the freely available material on the internet or buy the book once it is in print the first step in fighting fascism is arming yourself with knowledge. Use the remaining time you have wisely.
You can read the Nazi Hydra in America by clicking the link below.
[http://www.spiritone.com/~gdy52150/nazihydra.html]


2006-05-19 "Book on Pro-Nazi US Elite Censored; Indie Publishers Blast Bush, Throw Party at Book Expo America, May 19; The publisher of "Nazi Hydra in America” says corporations and search engines choke freedom of press and that a Bill of Rights for freedom of access on the Web is needed. Author Glen Yeadon to speak on the Alex Jones show regarding “Fascist First Families.” Georgetown's Grog and Tankard Music Club will be the place to be at BEA"
[http://www.prweb.com/releases/2006/05/prweb386881.htm]
by John Leonard
PROGRESSIVEPRESS.COM
760-366-3695
Washington, DC (PRWEB) -
Glen Yeadon is a scientist with an unusual hobby. For going on ten years he has collected data on one of America's darkest taboos -- the elite's enduring support for fascism -- and posted it bit by appalling bit on the Web as an online book, "The Nazi Hydra in America."
Yeadon's findings overturn the cherished tableau of America, the champion of democracy, defending the globe from totalitarian hordes. In relentless detail, he traces the intimate involvement of US financiers with world fascism from the 1920s to the present -- how they created Hitler and his war machine, attempted a putsch against FDR, and recouped Nazi assets to lay the foundation of today's NSA and CIA. His conclusion: the Nazis won the war -- they were on both sides!
The Bush dynasty has played a key role in the Amerinazi scheme for at least three generations, Yeadon says. Most notorious was our appointed president's grandfather Prescott Bush, AKA "Hitler's banker," as first revealed by Webster Tarpley and Anton Chaitkin in their "Unauthorized Biography" of George Bush Sr.
Yeadon says his web traffic to his online “Nazi Hydra in America” was chopped by 75%. He attributes the drop to the Bush regime's response to this unwelcome attention and the subsequent blocking by the leading search engines. On April 7th, Yeadon noticed traffic to his website suddenly fell sharply by 75% -- and remained there. It was four weeks before he realized the cause: excluded from search results on Google, AOL and Netscape.
Not even typing in the name of his book, “Nazi Hydra,” with his domain name, spiritone, would bring up his site. See [http://www.waronfreedom.org/press/GlenVsGugl.html].
Yeadon responded with a broadside against Google on indymedia -- which the Google bot faithfully indexed as a search result, e.g. http://sf.indymedia.org/news/2006/05/1727591.php. His publisher then scheduled him to appear on the Alex Jones' infowars talk show, but soon his website was Google-accessible again. He will be on http://www.infowars.com Wed., May 24 at 1 p.m. CDT and on Utah talk show KTTK on Thursday May 25th from 7:00 - 8:30 MST, http://www.k-talk.com.
Yeadon's publisher Progressive Press has struggled for a year now with the distribution of its hottest and most provocative title. "9/11 Synthetic Terror" usually ranks on Amazon in the top 80 political books, and the top 1,800 of all books in print, yet book chains Barnes & Noble and Borders will not carry it.
The incidents prompted publisher John Leonard to write:
"As more of us become economically dependent on web traffic, it becomes clear that we need a Bill of Rights for freedom of access on the Web. Corporations can't create monopolies and then say, ‘We are private persons and we have the right to deny service to whom we like, with the party politics we like.’
"The same applies to monopolistic book chains. The 14th amendment needs to be extended,” Leonard continued. “It prohibits discrimination on racial or religious grounds, but doesn't protect political dissent. There is a body of law prohibiting discrimination in employment, but no protection for self-employed people like authors and entrepreneurs. I tried searching for such 'fair-chance' laws on the web. All I found was that the constitutions of African nations often prohibit discrimination on grounds of political beliefs. It's time for us to try and catch up with Africa."
Currently, the book trade takes pride in being a bastion of First Amendment rights. While that seems to be true relative to the miasma of TV and newsprint, Leonard says, he believes he can come up with statistical proof of political bias in corporate book purchasing. He also wants to further develop the ideas of expanded individual vs. corporate rights to freedom of speech, freedom of the press, and equal opportunity, in a statement at http://www.waronfreedom.org/press/freedom.html.
*** Beltway Book Bop: Independent Publishers Speak Out Against Bush ***
"Join us, for a hopping party and speak-out, with great authors, 14 microbrews on tap, and a fun live band, all on opening night of Book Expo America, in Washington, D.C.," says Sander Hicks, maverick publisher, author, 9/11 investigator, Brooklyn coffee house restaurateur and Green Party candidate for Hillary Clinton's Senate seat.
The live band at the Grog & Tankard, a legacy music club and trendy watering hole in chic Georgetown, will be Baltimore indie rockers The Up Set, a delightful mix of lo-fi piano, banjo and rock and roll.
The energy-charged program from 7 to 9 pm will have four speakers of Truth to Power: Sander Hicks; Webster Tarpley, author of 9/11 Synthetic Terror and host of World Crisis Radio; Jim Walsh, author of Liberty in Troubled Times; and Rebel Bookseller author Andy Laties.
See [http://www.waronfreedom.org/press/indiepubpr.html] for more details.

"A devastating judgment."
Dissects the workings of the false-flag terror network which controls key nodes in government and media.... 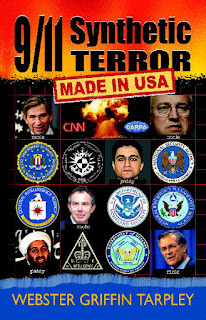 The book that made Bush 41 a one-term president
Groundbreaking classic expose of the Bush family - digs up all the dirt - frightening, gory, hilarious - on the Bush dynasty. 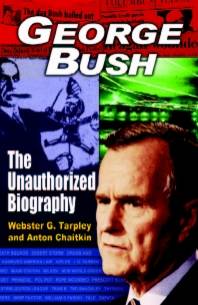 First Families of Fascism
Finally, a full history of how America's moneyed elite covertly strive to institute a fascist order.

Posted by Northbay Uprising Radio at 6:18 PM No comments: