2010-05-21 "Student Protests Tie Up Campuses in Puerto Rico" By OMAYA SOSA-PASCUAL and EMMA GRAVES FITZSIMMONS from "New York Times" daily newspaper
[http://www.nytimes.com/2010/05/21/us/21students.html?sq=puerto%20rico&st=cse&adxnnl=1&scp=2&adxnnlx=1312931597-cAx8e1XkM8dXXKgXKskU7Q]
SAN JUAN, P.R. — The seven entry gates on the largest campus of the University of Puerto Rico system remained chained shut on Thursday. Beyond improvised barricades were hundreds of students in makeshift camps, some with portable showers and stoves, hardly engaged in the typical college springtime routine of studying for final exams and preparing for graduation.
The students here have hunkered down, bringing the academic calendar to a halt. They are a month into a strike that has crippled an 11-campus system with more than 62,000 students, intent on persuading the administration to revoke austerity measures that they believe will unfairly hamper low-income students. Only one campus, for medical sciences, is operational.
The Río Piedras campus here in the capital has been closed since the strike began on April 21. When the students locked the gates, a confrontation with the police ensued, and university officials later decided to shut down the school. The territory is grappling with a huge budget deficit and an unemployment rate of 16 percent. The strike is the latest, most contentious protest against Gov. Luis G. Fortuño, a Republican elected in 2008. Thousands of union members rallied against planned layoffs by the government in a national protest last October.
As the university system announced budget cuts, students demanded an alternative and a greater transparency for university finances. One point of tension is funding for music, athletics and honors scholarships for students who also have federal grants.
“We understand this is social marginalization and discrimination against the people with less resources,” said Fernando Espinal, a law school graduate and former president of the student council.
University officials did not respond to requests for interviews.
Many public universities in the United States have faced tuition increases and cuts in funding because of states’ financial problems. In March, thousands of students and faculty members protested at the University of California.
But the strike in Puerto Rico has continued for weeks and grown increasingly tense, with reports of the police preventing the students from receiving supplies, food and water last weekend.
The fiscal crisis set up the conditions for the student strike, said Miguel Soto-Class, executive director of the Center for a New Economy, an independent research organization here.
“The University of Puerto Rico is receiving a significant amount less than it has received in the past,” he said. “It has forced the administration to undertake some cost-cutting measures that have not been popular with the students and some of the staff.”
Mr. Fortuño has encouraged both sides to work together to reach a solution, a spokesman said.
The governor said in an e-mail interview: “It is unfortunate that a minuscule group of students, that do not represent the vast majority of university students, have decided to take matters in their own hands and closed the university gates, thus precluding the vast majority of students to continue their studies, the teachers to impart their classes and the researchers to continue their research projects.”
The protesters spend their time reading and using computers with wireless Internet access to spread the word about the strike. They have received support from union leaders, writers and performers, including the Uruguayan writer Eduardo Galeano and the Puerto Rican musician Ricky Martin, who posted a supportive message on Twitter.
After negotiations between the administration and students fell apart on Thursday, Aura Colón Solá, a member of the university’s law school action committee, said she was prepared to continue the strike for several more months. She said she was upset that university officials had sued some student leaders to try to end the strike.
“You do not sue students if you really intend to negotiate,” she said. “It is ridiculous. They would have to sue the 200 students in here and the thousands that voted in favor of this.”
Maritza Stanchich, an English professor at the Río Piedras campus who supports the strike, said many professors viewed the strike as a “teachable moment” to show the students how to stand up for themselves.
“It has been an enormous disruption,” she said, “but it’s meant to be that way to force the administration to negotiate.”
Students said the administration tried to end the strike through a court injunction, but public backlash intensified and Mr. Fortuño revoked the court order after three days. This week, the police chief ordered a reduction of the police presence.
On Thursday, the mood was calm at the main gate, where about 20 police officers stood guard. A large sign on the fence read “You may cut all the flowers, but will never eradicate spring.” 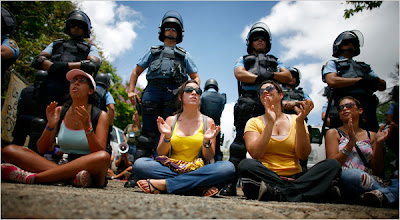 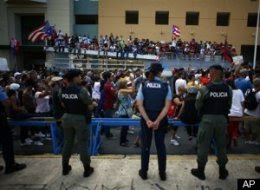 Posted by Northbay Uprising Radio at 4:13 PM No comments: