"Under Amazon’s CIA Cloud: The Washington Post"
2013-12-18 by Norman Solomon for "Common Dreams" [http://www.commondreams.org/view/2013/12/18-0]:
Jeff Bezos recently acquired the Washington Post, but the company that made him his real fortune, Amazon.com, is also under a multi-hundred million dollar contract with the CIA for computing services. (Credit: Reuters/Shannon Stapleton) 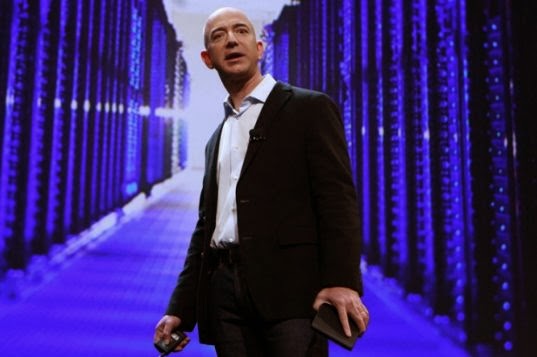 News media should illuminate conflicts of interest, not embody them. But the owner of the Washington Post is now doing big business with the Central Intelligence Agency, while readers of the newspaper’s CIA coverage are left in the dark.
The Post’s new owner, Jeff Bezos, is the founder and CEO of Amazon -- which recently landed a $600 million contract with the CIA. But the Post’s articles about the CIA are not disclosing that the newspaper’s sole owner is the main owner of CIA business partner Amazon.
Even for a multi-billionaire like Bezos, a $600 million contract is a big deal. That’s more than twice as much as Bezos paid to buy the Post four months ago.
And there’s likely to be plenty more where that CIA largesse came from. Amazon’s offer wasn’t the low bid, but it won the CIA contract anyway by offering advanced high-tech “cloud” infrastructure.
Bezos personally and publicly touts Amazon Web Services, and it’s evident that Amazon will be seeking more CIA contracts. Last month, Amazon issued a statement saying, “We look forward to a successful relationship with the CIA.”
As Amazon’s majority owner and the Post’s only owner, Bezos stands to gain a lot more if his newspaper does less ruffling and more soothing of CIA feathers.
Amazon has a bad history of currying favor with the U.S. government’s “national security” establishment. The media watch group FAIR pointed out what happened after WikiLeaks published State Department cables [http://www.fair.org/blog/2013/08/06/amazon-wilkileaks-the-washington-post-and-the-cia/]: “WikiLeaks was booted from Amazon’s webhosting service AWS. So at the height of public interest in what WikiLeaks was publishing, readers were unable to access the WikiLeaks website.”
How’s that for a commitment to the public’s right to know?
Days ago, my colleagues at RootsAction.org launched a petition that says [http://act.rootsaction.org/p/dia/action3/common/public/?action_KEY=8979]: “The Washington Post’s coverage of the CIA should include full disclosure that the sole owner of the Post is also the main owner of Amazon -- and Amazon is now gaining huge profits directly from the CIA.” More than 15,000 people have signed the petition so far this week, with many posting comments that underscore widespread belief in journalistic principles.
While the Post functions as a powerhouse media outlet in the Nation’s Capital, it’s also a national and global entity -- read every day by millions of people who never hold its newsprint edition in their hands. Hundreds of daily papers reprint the Post’s news articles and opinion pieces, while online readership spans the world.
Propaganda largely depends on patterns of omission and repetition. If, in its coverage of the CIA, the Washington Post were willing to fully disclose the financial ties that bind its owner to the CIA, such candor would shed some light on how top-down power actually works in our society.
“The Post is unquestionably the political paper of record in the United States, and how it covers governance sets the agenda for the balance of the news media,” journalism scholar Robert W. McChesney points out. “Citizens need to know about this conflict of interest in the columns of the Post itself.”
In a statement just released by the Institute for Public Accuracy, McChesney added: “If some official enemy of the United States had a comparable situation -- say the owner of the dominant newspaper in Caracas was getting $600 million in secretive contracts from the Maduro government -- the Post itself would lead the howling chorus impaling that newspaper and that government for making a mockery of a free press. It is time for the Post to take a dose of its own medicine.”
From the Institute, we also contacted other media and intelligence analysts to ask for assessments; their comments are unlikely to ever appear in the Washington Post [http://www.accuracy.org/release/cia-cloud-over-jeff-bezoss-washington-post/].
“What emerges now is what, in intelligence parlance, is called an ‘agent of influence’ owning the Post -- with a huge financial interest in playing nice with the CIA,” said former CIA official Ray McGovern. “In other words, two main players nourishing the national security state in undisguised collaboration.”
A former reporter for the Washington Post and many other news organizations, John Hanrahan, said: “It's all so basic. Readers of the Washington Post, which reports frequently on the CIA, are entitled to know -- and to be reminded on a regular basis in stories and editorials in the newspaper and online -- that the Post's new owner Jeff Bezos stands to benefit substantially from Amazon's $600 million contract with the CIA. Even with such disclosure, the public should not feel assured they are getting tough-minded reporting on the CIA. One thing is certain: Post reporters and editors are aware that Bezos, as majority owner of Amazon, has a financial stake in maintaining good relations with the CIA -- and this sends a clear message to even the hardest-nosed journalist that making the CIA look bad might not be a good career move.”
The rich and powerful blow hard against the flame of truly independent journalism. If we want the lantern carried high, we’re going to have to do it ourselves.
Posted by Northbay MDS at 2:26 PM