2012-01-31 "Rhode Island Tea Party State Senator Who Introduced “Right-to-Work” is a 21-Year-Old College Student Whose Last Job Was Cracker Barrel Dishwasher"
[http://wepartypatriots.com/wp/2012/01/31/rhode-island-right-to-work-introduced-by-cracker-barrel-dishwasher/]
State Senator Nicholas Kettle has introduced legislation in Rhode Island that would place “Right-to-Work” restrictions on teachers unions [http://www.wpri.com/dpp/news/local_news/providence/rhode-island-lawmaker-senator-nicholas-kettle-to-introduce-teachers-right-to-work-bill]: “Teachers in Rhode Island deserve a choice,” Kettle said. “The National Education Association uses questionable tactics when dealing with our legislature…harming the reputation of many fine teachers and placing our children at the bottom of our priority list.”
Kettle, who is 21, is a prime example of the unqualified candidates that were swept in by Tea Party momentum at the state level in 2010 and the damage they can do once they are in “power.” Saying Kettle is “unqualified” may well be a glaring understatement. Before defeating 20 year political veteran Leo Blais by the narrow margin of 23 votes, Kettle had been employed as a dishwasher at Cracker Barrel.
This blog has nothing against Cracker Barrel (we love dumplings, in fact) and, quite obviously, nothing against starting at the bottom and working your way up.

But let’s get real.
Kettle appears to have employed a bit of the old bait and switch since becoming a member of the Rhode Island Senate. He has been called out by those he claimed to support on the campaign trail but ignored once he get to Providence. One of those groups is Rhode Island’s LGBT community. Kettle said he supported gay marriage to get votes and then promptly “changed his mind” once elected [http://www.anchorweb.org/news/ric-student-changes-politics-1.2477701#.TylgifnJnq0]. The Political Action Group Marriage Equality for Rhode Island responded by passing out fliers at Rhode Island College where Kettle is currently enrolled. Yes, the man that is trying to enact “Right-to-Work” in Little Rhodey is STILL STUDYING HISTORY.
Kettle has also had trouble watching what he says since his surprise election in 2010. He has used his position on the Housing and Municipal Government committee to insult homeless people [http://www.rifuture.org/state-senator-nicholas-kettle-has-learned-what-exactly.html]:
In an e-mail before the hearing, freshman Sen. Nicholas D. Kettle urged Tea Party supporters to question homeless advocates and “fill up the room before the homeless folks! Help me ask why this homeless person has better clothes than I,” he said.
Kettle promised to ask tough questions and called Tassoni’s hearings a “dog-and-pony show.”
But during the hearing, Kettle apologized for the message, after homeless advocate John Joyce read it aloud and asked why Kettle hated the homeless and the poor.
Kettle said he didn’t hate the homeless, but that he sent the e-mail “out of frustration” and because he thought the hearing was one-sided.
“Don’t apologize to me,” said Joyce, who was once homeless. “Apologize to the homeless people of the state.”
Every young adult is allowed to make mistakes as long as they learn lessons from them. Sure, Kettle apologized, but he also suggested that the only lesson he really learned was to “watch what you put in writing.”
Kettle will have to defend his record, or lack thereof, when he runs for re-election this November. Now that he’s 21, he can use the “guy you’d want to have a beer with” argument to rally his base. Or, at least, his classmates.

Scan of the "Stars" magazine which originally revealed the young fascists work history: 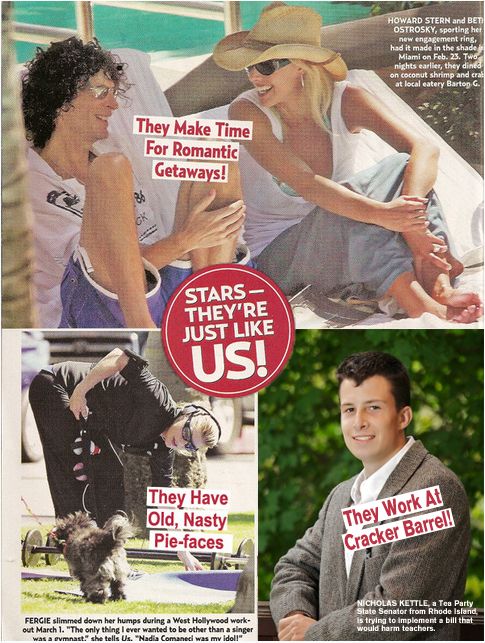